If you are an aspiring singer-songwriter, open mic nights are an invaluable opportunity to learn your craft and make connections. Before you bounce out the door with a guitar over your shoulder, pause a moment to assimilate my many years of hard-won open mic wisdom. Well, this is what works for me at least. In no particular order:

Everybody at open mics seems compelled to punctuate their setlist with an array of little apologies and excuses. I get it. But resist! Be the one act on the night that puts everyone at ease by simply playing your music and standing by it. True humility here lies not in acknowledging your flaws and hiccups, but in granting your audience the power to judge for themselves.

This is not about getting a great recording for posterity, so don’t worry about the device you use, or its position in the room. An iPhone in your pocket will do. It’s merely about evaluating your performance by listening back objectively. This is the only way to truly recognise that you play all of your songs way too fast onstage. Or that your mic control is poor because you’re paying far more attention to your guitar playing. Or that the audience applause was actually just lukewarm and cursory, rather than joyful and sustained. When your recording captures only a subdued smattering of polite applause, it’s a clear indication that you are simply not good. Not good yet. So gather some data in the form of a recording, analyse your material, your delivery, and the effect on the crowd, and figure out how to improve.

Your favourite local performers will likely become your closest friends and collaborators and band mates, and even your chief source of inspiration on your musical journey. You’ll be their most staunch advocate, as they will be yours. But there will be plenty to glean from the ones that make you want to spring from the room clawing at your ears, too. Reframe the moment not as entertainment but as research. This person is teaching you what not to do, if nothing else. It’s all valuable.

What do you say when you hit the stage? And between your songs? This is the hardest part of the entire equation for me - public speaking is my worst nightmare. It feels way more exposing to have to talk ‘as myself’ to a room full of people, than it does to play them a song, even if that song is emotionally raw. Any song is still on some level mere artifice, a construct. But talking off the cuff into blinding stage lights… shudder. If you’re like me, allow me to allay your fears somewhat. Just state your name and the title of the next song, and do so slowly and clearly, directly into the microphone. If you can execute that, you’re golden.

Don’t use a notebook or ipad placed on a music stand as an aide mémoire during your performance. Many will argue that it’s fine to do that, especially since open mics are a place to try out new material. But if you don’t know the material inside out then you can’t possibly perform it fully, you can’t live through it and get inside it and pour it out into the room from the heart. Granted, we mustn’t talk ourselves out of ever playing, waiting for some impossible day when we’ll be fully-formed and take the world by storm overnight. But if you can’t even remember the lyrics, it’s not ready yet. Keep practising.

This one is about the logistics of ensuring you get your name on the list to play. It’s also about respect for the organiser and venue and other performers. And thirdly it’s about being available for the chance encounters, or moments of inspiration, or nuggets of opportunity that cannot possibly land if you are not physically there to catch them. The host cannot accommodate everybody and keep the night flowing if we’re all rocking up fashionably late. Get there early, settle into the environment, buy a drink so that the venue can survive to host again another day. Say hi to people. Good gig etiquette and professionalism play a major role in how you make your own luck in this game.

When you’ve strummed your last chord, you might want to sprint from the stage in shame, or dive from the stage into the arms of an adoring crowd, but wait! Wait for an exchanged nod with the sound engineer. Then unplug your jack lead. The venue’s equipment and the audience’s eardrums will thank you.

Add variety to your set

I’ve lost count of the number of times I’ve really enjoyed a performer’s first song, but then been a little disappointed that the second song sounds almost exactly the same, and then by the third carbon-copy song, all the magic has already gone. You have to find ways to add some variety and contrast with shifts in key, time signature, tuning, dynamics, topic or mood.

No place to tone chase

Don’t sweat your tone too much at open mic nights. Sound is the medium we work in as musicians, so it makes sense to give your sonic palette some degree of attention. Sure. But man, we clearly all have too much information (and disposable income) available to us today, and have started to confuse shopping with creativity. Don’t waste too much time, energy, and money on GAS (Gear Acquisition Syndrome). That time and energy is far better spent on songwriting and practising, and for open mics in particular, less is more. I’ve had periods when my solo gigging setup got a little bit fancy, with loopers, synths, drum machines, vocal processors and more. That was overkill for the organic flux and stretched resources of most open mic nights. A guitar (literally any guitar) and a tuner is all you really need. Open mics are about intimacy and immediacy, with nothing getting between your song idea and the audience.

Consider not bringing friends for support, especially if you suspect that they won’t sit quietly giving other performers the same attention they give you. Open mics are often attended almost exclusively by fellow performers, and that’s fine. You’ll engage with new people, almost instantly forging bonds over battle, rather than remain locked into your usual social bubble, which can be constraining when you’re trying to do something new and bold and against expectation. Rocking up to an open mic alone is a rite of passage.

Treat setting up and de-rigging your gear as part of your performance, literally. Walk into a room in your house with all your stuff, unpack it and plug it all in. Then pack it all back up again. Make sure you can do that really quickly and efficiently. An open mic is a bit of a logistical headache so try to be as minimalistic as you can, and if you do need a pedalboard or other elements to your rig, at least make sure that you all your requirements are accounted for and can be deployed without a hitch. You need to be efficient, self-sufficient, and able to handle the mechanics of gigging on autopilot, because that’s the boring stuff that you don’t want to waste any energy on - when your time comes, you want to concentrate all of your conscious resources on the arty bit.

If you don’t have everyone’s attention, play your quietest song. The good open mics are in dedicated spaces with a culture of respectful listening. But any time a restless or inebriated crowd get a bit too chatty, what you should do is to play quieter. That’s my number one counter-intuitive secret hack. Other acts will frustratedly bash out their noisiest song to try to drown out the din, which only serves to make everybody shout louder. But if you have the guts to start playing a hushed, plaintive song, you’ll be amazed at how the whole space kind of self-regulates, simmers down, and leans in to your performance.

If the house rules are just two songs, never take liberties with that and sneak in an extra one. I’ve seen so many people shamelessly do that - maybe they’ve travelled a long way to play, or have persuaded a gaggle of friends to come, and they feel that they’re owed more minutes of limelight. Do not be that guy/gal, you’re just screwing over everyone else who is yet to play. Two songs is enough for everybody in the room to know fairly definitively that you rock (or otherwise). Make an impact and leave people wanting to hear more.

Get comfy with the microphone

If you’re not accustomed to mic stands you might need to fumble about awkwardly for a bit to get the mic in a good position. No worries, take your time on that. You want to be able to sing in whatever posture is natural for you, not one dictated by the mic. And you don’t want the dreaded mid-song droop, as a poorly tightened boom arm slowly creeps further and further away from you!

Be compassionate and encouraging towards the other acts. Personally, my taste in music, as in all art forms, is very critical. I’m the kind of person who can be counted on to think that the new Netflix series everybody is obsessed with is utter trash. I’m insufferable like that, it’s just how I’m wired. So I probably won’t enjoy many of the other acts. But I will still listen to them attentively, and clap, and find something I can compliment if I end up chatting to them. Not because I’m full-of-shit, hopefully. But because I have the basic empathy to recognise the courage it takes to stand up and communicate something meaningful. Perhaps us performers are just narcissists, but I’d prefer to believe that performing our music is an open-hearted and un-ironic act of sharing in jaded times. So give everyone a thumbs up for effort, at least.

Cultivate a healthy capacity for embarrassment. You can’t curate everything the way you do your Instagram account. To be a creative person is to put yourself out there and to be vulnerable and to fail publicly. As Beckett said, “Try again. Fail again. Fail better”. 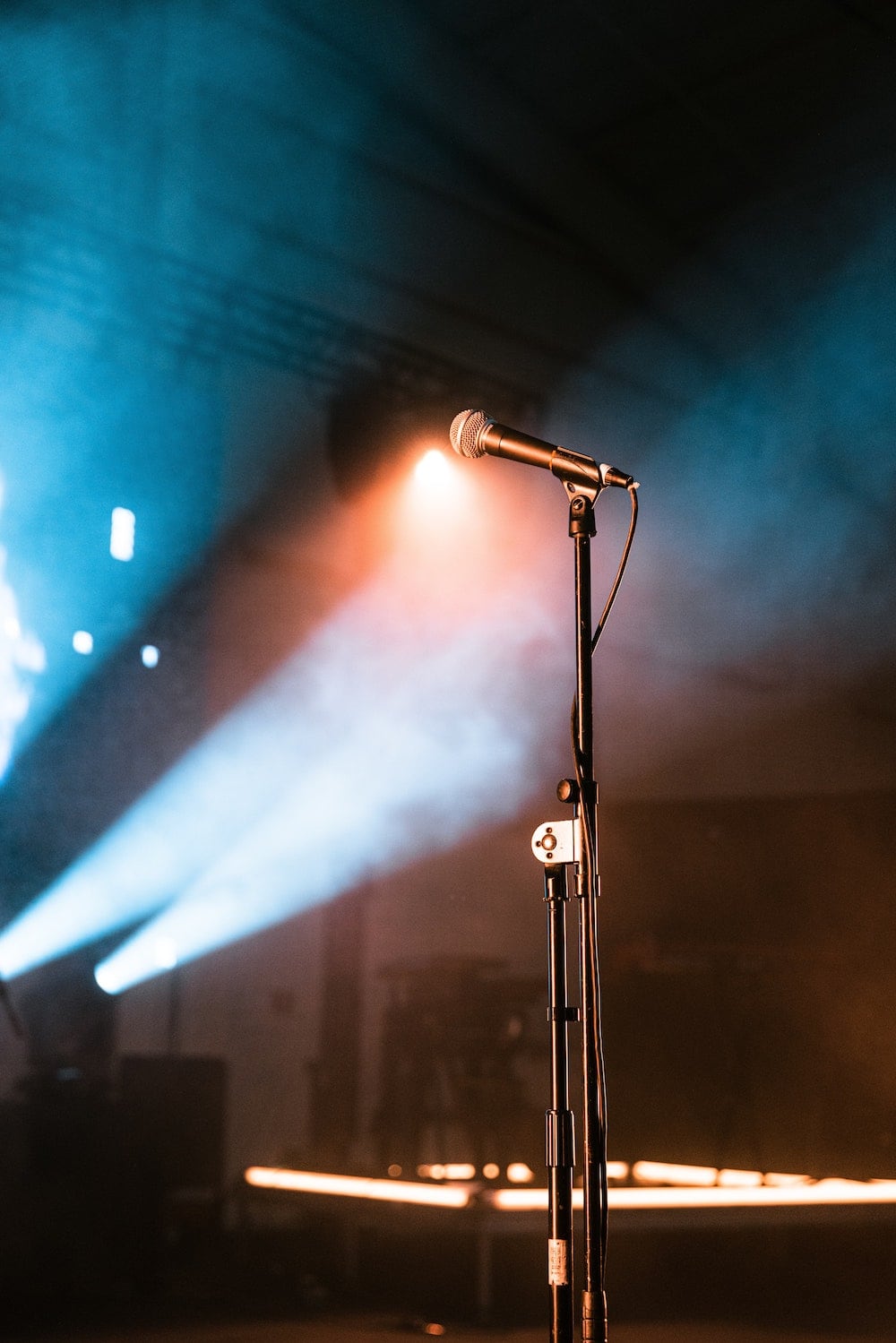